Watch the official International HD trailer for K2: SIREN OF THE HIMALAYAS below:

On December 24, 2014, K2: SIREN OF THE HIMALAYAS peaked as the Number One ranked documentary on iTunes. More than one moth after the film’s VOD and DVD release via First Run Features, it has stayed strong, continuing to climb the iTunes charts.

The film has remained in the Top 10 of both the Sports and Documentary rankings from its day and date release through the end of 2014, peaking at the top spot of both categories.

After an award-winning international festival run, K2: SIREN OF THE HIMALAYAS is opening in New York City at the Quad Cinema (34 West 13th Street) for a week long run starting August 22.

Tickets are available for daily screenings at 1:00pm, 4:30pm and 8:05pm. Filmmakers Dave Ohlson and Jason Reid will be in attendance opening weekend.

K2: SIREN OF THE HIMALAYAS announced screening dates for an upcoming festival run that will take the film to audiences across the U.S. and Europe.

K2: SIREN OF THE HIMALAYAS made its U.S. Premiere at Mountainfilm in Telluride on Memorial Day Weekend 2013! This was the perfect place to experience our K2 documentary on the big screen, and our team had an absolutely amazing festival experience in Telluride. See the official press release for more details and check out the festival at mountainfilm.org. 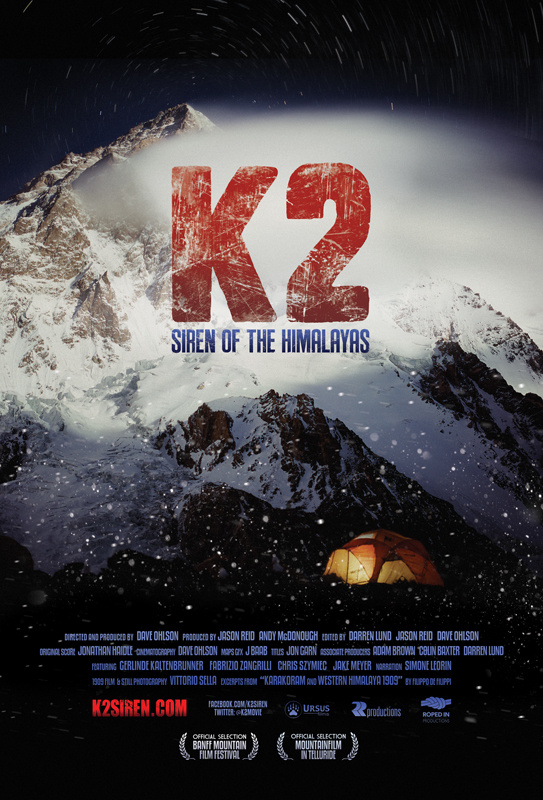 K2: SIREN OF THE HIMALAYAS had a successful world premiere at the Banff Mountain Film Festival! Serendipity struck again in our favor, as our post-production team put the finishing touches on the movie just in time to premiere at a special Banff Centre live event with one of the stars of our film, Gerlinde Kaltenbrunner. The sold out audience responded well, and the film received interest from a few distribution outlets. We’re planning the U.S. Premiere next, stay tuned!